1 First application of IFRS 16 - "Leases" from January 1, 2019 (the impacts are described in the half-year report, no retrospective amendment for 2018).
2 The revenue differs by €0.9 million to that reported on July 28, 2019 due to amendments to the application modalities of IFRS 15 "Revenue from Contracts with Customers" for certain contracts.
3 Current operating income before depreciation, amortization and provisions.

For the first half of 2019, ECA Group's consolidated revenue was €57.1 million, with a significant 13.3 % increase. On a like-for-like basis, excluding contributions from the SSI and EN Moteurs subsidiaries disposed of in 2018, the increase was 13.9 %. This acceleration is driven by the remarkable performance of the Robotics and Aerospace divisions which benefit from the dynamic sales momentum recorded since the start of the financial year.

EBITDA grew by 85.4 % to €9.9 million. The EBITDA margin jumped from 10.6 % in first-half 2018 to 17.3 % this quarter. This is the result of the excellent progress in the Robotics division, improved profitability in the Aerospace division and the application of IFRS 16 – Leases for €1.1 million.

After non-recurring items of €0.4 million mainly due to restructuring costs in the Aerospace and Simulation divisions amounting to €0.3 million and the amortization of intangible assets recognized at fair value duringacquisitions amounting to €0.1 million, operating income was up 322.9 % to €3.8 million. The operating margin was 6.6 %, up significantly compared to the first half of 2018.

Financial income and expenses contributed favorably to income, in the amount of €0.2 million, due to default interest collected for the repayment of a research tax credit claims.

The impact of the first application of IFRS 16 - Leases was €1.1 million on EBITDA, but is negligible on operating income and net income (less than €0.1 million).

4 2018 sector data is adjusted for the contribution of activities for which the closure or disposal were decided in 2017 (sale of the business capital of SSI in August 2018 in the Simulation division).

Revenue from the Robotics division was €35.8 million in the first half of 2019, up 29.6 % compared to the first half of 2018. The division posted a remarkable performance this half-year thanks to the good level of backlog and the start of the mine-hunting contract for the Belgian and Dutch navies. The Group recognized a part of the revenue that could be recognized this year for the contract; the teams are mobilized and being recruited, and the study phase of the project has started.

Thanks to the good level of business, the division's EBITDA was up 130.7 % to €9.3 million, with an EBITDA margin of 26.0 %, compared to 14.6 % for the same period last year. The division's operating income was multiplied by more than 5 to €5.1 million for the half, compared to €0.9 million for the first half of 2018. The operating income benefited from €1 million in fair value adjustment for the investment in
WANDERCRAFT.

The division's backlog was €517.5 million at June 30, 2019, multiplied by more than 7 compared to June 30, 2018. It includes the major order for 12 mine-hunting vessels for the Belgian and Dutch navies, and offers exceptional visibility for the coming years.

Revenue for the Aerospace division was up by 11.2 % in the first half of 2019. This remarkable performance is due to the good level of orders recorded since the start of the financial year, the ramp-up of Ground Support Equipment and a favorable base effect.

The division's EBITDA margin was 5.9 % for the half, compared to 1.9 % for the first half of 2018. The division saw a significant improvement to its profitability with the ramp-up of projects, whilst the disturbance caused by regrouping of Toulouse aerospace activities on a single site. Operating income was -€0.4 million, compared to -€0.5 million for the first half of 2018, impacted by restructuring costs related to the relocation for €0.3 million.

The division's EBITDA was down by -€1.5 million, impacted by a temporary low workload. Operating income was -€1.0 million compared to €0.6 million for the first half of 2018.

Operating cash flow for the half-year was €4.5 million. Cash flow was up €4,9 million compared to 2018 (of which €1.1 million due to the application of IFRS 16), but the working capital requirement increased by €2.1million.

For 2019, the Group confirms that its revenue growth target in excess of 5 % should be largely exceeded.

In the Aerospace division, the good level of backlog enables us to expect a robust performance for the second half of the year. The sales momentum remains favorable notably in the Automated Guided Vehicles segment, which is the application of the Group's know-how to drones and land vehicles, with these new developments raising significant signs of interest notably in the aerospace sector. The ECA Group expects significant potential for this activity over the medium term.

The Group is awaiting significant calls for tender in the Simulation division which should contribute to the activity's recovery.

Lastly, in the Robotics division, performance should continue to be at a very good level, driven by the execution of the contract for the supply of 12 mine-hunting vessels to the Belgian and Dutch navies. Some new mine-hunting contracts opportunities are already identified in several countries.

The information on the 2019 half-year results includes this press release and the presentation available on ECA Group's website.

Today, Wednesday September 18, 2019, Guénaël Guillerme, Chief Executive Officer, and Loïc Le Berre, Deputy Chief Executive Officer and Chief Financial Officer of Groupe Gorgé, will provide the financial community with their comments on the ECA Group's results and respond to questions from analysts during a conference call in French from 10:00 a.m. (Paris time).

To participate in the conference call, you may call any of the following telephone numbers approximately 5 - 10 minutes prior to the scheduled start time:

A replay will be available as soon as possible on the ECA Group investor site, under "Documents". 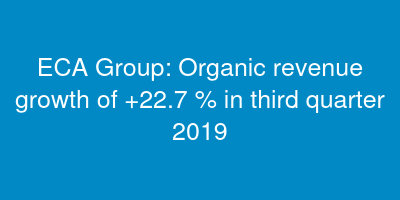